On 1 January 2020, stand-up comedian, Munawar Faruqui, was arrested on allegations of hurting religious sentiments, among other charges, after a group interrupted a performance taking place in Indore, Madhya Pradesh. Faruqui has been held in detention since his arrest. 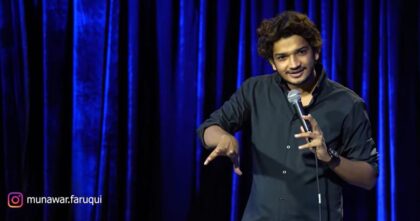 Stand-up comedian, Munawar Faruqui, who is also a Muslim, is known for his observational style that is typically topical and/or political.

Media reports indicate that Faruqui had barely begun his set, when members of right-wing group, Hind Rakshak Dal – including the son of the current mayor of Indore – stormed the stage and argued that Faruqui had hurt their sentiments, seeking a promise that he would refrain from cracking jokes about Hinduism in future.

Shortly after, the group forced Faruqui and others performing – including, Nalin Yadav, Prakhar Vyas, Priyam Vyas, Edvin Anthony and Sadakat Khan – to a local police station where they filed a complaint against them for violating Sections 269, 295-A, 298, 188 & 34 of Indian Penal Code (IPC). The complainants alleged that the group had violated COVID-19 guidance, did not have the proper permissions to hold the event, and had hurt religious sentiments.

The courts have twice denied Faruqui’s application for bail despite police acknowledgment of a lack of evidence against him. The failure to release Faruqui has been seen by some as an example of intensifying bias against Muslims within the system.

On 7 January 2021, police in Uttar Pradesh filed a production order to the Indore jail in which Faruqui is being held, in connection with a case filed against him in April 2020. According to media reports, the Faruqui stands accused of having spread communal disharmony and hurt religious sentiments in a YouTube video. A court in Indore would need to rule on the order before Faruqui was transferred into the custody of the Uttar Pradesh police.

Intolerance of criticism of religion and or superstitious practices is all too common in contemporary India. In August 2019, the EBL Coalition raised its concerns regarding the ongoing crackdown on free expression in India, highlighting how legislation like Section 295 of the IPC criminalizing “hurting religious sentiments” are utilised to silence those questioning the tenets of faith, in particular Hinduism. Most recently, Amazon Prime was forced to censor its political drama ‘Tandav’, Hindu nationalists filed police reports alleging that several scenes hurt Hindu religious sentiments and insulted the office of the Prime Minister.

Such intolerance does not stop at legal harassment; since 2013, three prominent rationalists have been murdered. To date, investigations into their murders remain ongoing. The result is a climate of fear. Individuals around the country are being forced into silence even when operating within the boundaries set by international human rights law.

The End Blasphemy Laws Coalition urges the authorities to uphold its obligations to safeguard freedom of expression as prescribed by Articles 19 in the Constitution of India and the International Covenant on Civil and Political Rights, by dropping its investigation into stand-up comedian Munawar Faruqui and releasing him immediately and unconditionally.