Despite its famously secular constitution, Turkey has had intermittent bouts of prosecutions under “blasphemy” laws, including under the current, Islamist-leaning AKP government.

Freedom of expression is protected by the constitution, but is increasingly not respected in practice. Crackdowns on social media in 2014, including an enforced Twitter blackout, gained attention worldwide.

There are specific legal provisions against blasphemy in the broad and subjective form of prohibiting “disrespect” of religion.  Article 216 of the penal code outlaws insulting religious belief with section 3 of the article stating:

“Any person who openly disrespects the religious belief of a group is punished with imprisonment from six months to one year if such act causes potential risk for public peace.” 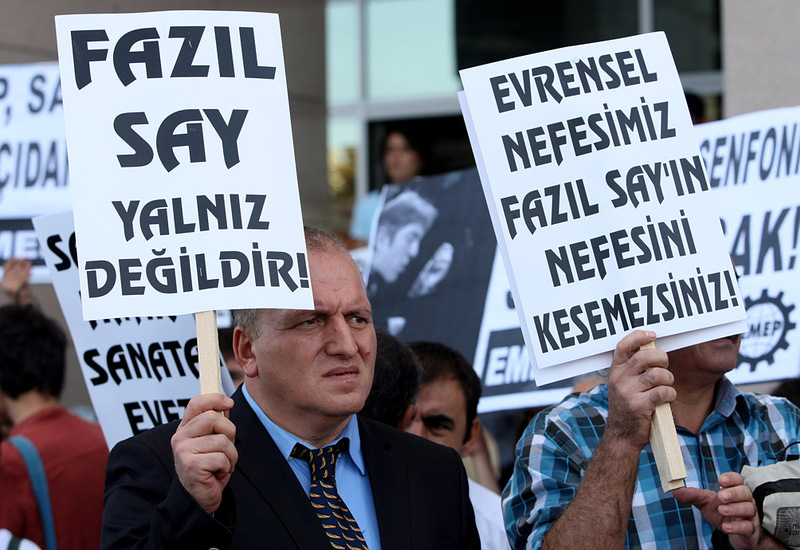 The prosecution of world-renowned Turkish pianist Fazıl Say in 2013 was only one of the most prominent legal actions against Turkish artists, writers and intellectuals who have made statements about religion and Turkish national identity. Say, an atheist and classical and jazz pianist, was charged with insulting Islamic values in Twitter messages. The cited message echoed the words of famous 11th-century Persian poet, Omar Khayyam, poking fun at afterlife beliefs. Say denied the charge, but was handed a suspended 10-month jail term on 15 April 2013.

Armenian writer and atheist Sevan Nişanyan is currently serving a two-year prison sentence ostensibly for building regulation violations, but the prosecution appears selective and the is widely regarded as being linked to his writings on national identity, the Armenian genocide, and religion. He had previously been convicted and sentenced to 15 months, in May 2013, under Article 216/3 of the Penal Code, for supposed “defamation” of religion. The charge related to a blog post in which he criticised the government’s response to the Innocence of Muslims Youtube video in 2012 (there were calls to prohibit criticism of the historical Mohammed). In an interview with PEN International in January 2015, conducted via an intermediary from jail, Nişanyan said:

“The blog piece for which I was prosecuted and convicted argued simply that disrespectful speech about an ancient Arab leader – implying the prophet of Islam – was a matter of free speech that should be under the protection of law. It employed mildly disrespectful language about the prophet to illustrate the point.

As a result I was attacked in vile language by a government minister, a top aide to the then prime minister, and the top religious official of the country; several newspapers launched a lynching campaign; I received hundreds of death threats; I was prosecuted in about a dozen courts around the country; and I was sentenced to 15.5 months in jail for blasphemy.

I believe the case illustrates how gravely free speech is imperilled in this country; at least as far as Islamic prejudices are concerned.

In May 2014, authorities cracked down on a popular online forum. Sedat Kapanoğlu, founder of one of Turkey’s most popular online forums, Ekşi Sözlük (Sour Dictionary) was given a 10-month suspended sentence for blasphemy. A police complaint alleging insults to the Prophet Muhammad were made on a discussion thread at the forum. Some 40 forum members were detained by police and charged with insulting religion. The court ruled that Kapanoğlu had committed the crime of “insulting the religious values shared by a group of society”. The 10-month sentence was suspended, based on the time elapsed since the crime was committed and the means used for it. The court also gave suspect Özgür Kuru seven months and 15 days in jail on the same charges, but also suspended the sentence. The court acquitted a third suspect, Altuğ Şahin, on the grounds that it could not be detected whether he actually committed the crime of “insulting religious beliefs.” The court also decided to suspend the cases against other 37 suspects. However, all the suspects may be retried if they commit the same crime within three years.

In October 2014, an unnamed woman was arrested for tweeting a picture of a stiletto on a Quran. The tweeter was arrested after a complaint from Ankara Mayor Melih Gokcek of the AKP. Gokcek himself re-posted the photo on Twitter, adding, “No one has a right to insult our religion”. Gokcek has allegedly sued as many as 3,000 people for insulting him. Ironically, his re-sharing of the image is now the most prominent place it can be found: