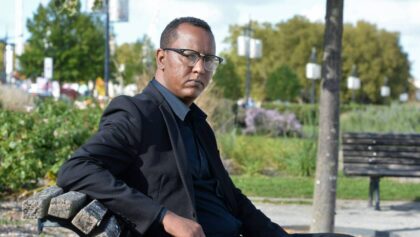 Speaking before the United Nations’ Human Rights Council on behalf of EBL Coalition partner Humanists International, anti-slavery activist and blogger, Cheikh Ould Mohammed Mkhaitir set out how, “in the years since [his] arrest, the Mauritanian government has only become more repressive.” He referenced an amendment to the Penal Code in 2018, which has made the death sentence for crimes of apostasy and blasphemy compulsory.

Mkhaitir also criticized Mauritania for its persecution of anti-slavery activists and human rights defenders, many of whom find themselves subject to arbitrary arrest and detention, often on politicized “blasphemy” charges, for “inciting hatred” or “making statements contrary to the official doctrine of the Islamic Republic of Mauritania“, under a 2018 Non-Discrimination and Criminalization of Hate Speech Act.

Mkhaitir himself was arrested for crimes of “blasphemy” and “apostasy”, for publishing material that was critical of Mauritania’s system of caste discrimination and slavery. Owing to the nature of the charges and the dangers posed, Mkhaitir – like many others – struggled to retain a lawyer to act in his defence.

Mkhaitir’s statement was delivered during the adoption of Mauritania’s Universal Periodic Review (UPR) report at the UN Human Rights Council, a process which examines the human rights performance of all 193 UN Member States every 5 years. Mauritania’s next review will be in 2025.

The End Blasphemy Laws Coalition urges the Mauritanian authorities to reconsider its questionable position on “blasphemy” and apostasy laws – Mauritanian citizens and foreigners have a right to equal treatment under the law. Moreover, both have a right to freedom from arbitrary laws that violate their right to freedom of expression, religion or belief. The Coalition urges Mauritania to protect dissident voices from their arbitrary imposition and heavy penalties by moving to repeal these laws.