Georgia: European Court on Human Rights rules in favour of freedom of expression in blasphemy case

The End Blasphemy Laws Coalition welcomes the decision of the European Court of Human Rights in favour of condom manufacturer Aiisa and freedom of expression.

Aiisa’s owner faced administrative sanctions under Section 3 of the Advertising Act and Article 159 of the Code of Administrative Offences in 2018, in connection with four images posted on the brand’s Facebook page that depicted images deemed to be offensive to members of the Georgian Orthodox Church, the State’s predominant religious group.

The second design used a cartoon depiction of “King Tamar”, a female ruler of Georgia between 1184 and 1213 canonised as a saint by the Georgian Orthodox Church. The image featured her face, with her looking up while biting her lips, accompanied by the text “samepo kari tamarshi” (“სამეფო კარი თამარში”). The literal meaning of the text was “The Royal Court inside Tamar”, but given the way it sounded, it also alluded to the name, translated into Georgian, of the television series “Game of Thrones”. Critics alleged that the design offended the religious feelings and national dignity of Georgians. 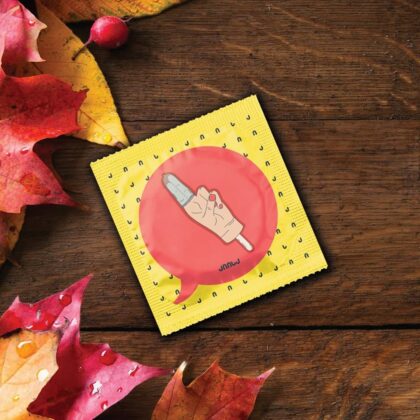 The third design showed a cartoon depiction of a vertically positioned female left hand with red nail polish. A condom was placed over the raised index and middle fingers, and has been associated by critics with a hand gesture widely used in religious ceremonies as the “right hand of blessing”.

The fourth design was deemed to insult the national dignity of Georgians for its use of a cartoon depiction of an inflated crown, seemingly made from a condom, with the text “Miraculous Victory” (“ძლევაჲ საკვირველი”) underneath. The phrase is reportedly associated, in historical sources and common parlance, with the Battle of Didgori of 1121 resulting in victory by the Kingdom of Georgia over the army of the Great Seljuk Empire.

According to court documents, Aiisa (meaning “that thing” – referencing national taboos around talking about contraception) aims to shatter stereotypes and “to aid a proper understanding of sex and sexuality” through its packaging and marketing campaigns, often referencing historical and political events, figures, literature and culture. 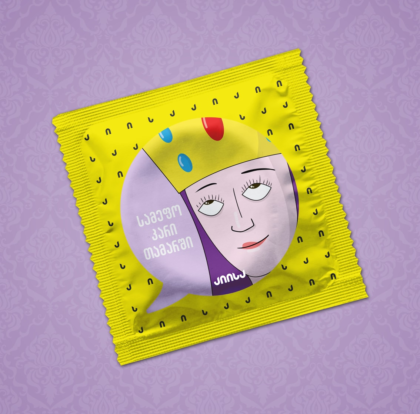 In its judgement dated 22 July 2021, the European Court of Human Rights asserted that,

“the views on ethics of the Georgian Orthodox Church took precedence in the balancing of various values protected under the Convention and the Constitution of Georgia.”

“In a pluralist democratic society, those who choose to exercise the freedom to manifest their religion must tolerate and accept the denial by others of their religious beliefs and even the propagation by others of doctrines hostile to their faith.”

“advertising which violates universally accepted human and ethical (ზნეობრივ) norms by using insulting words and comparisons in relation to nationality, race, profession, social origin, age, gender, language, religion, political and philosophical beliefs of natural persons[;] encroaches on (ხელყოფს) objects of art [included in the list of] national and world cultural heritage [or] historical and architectural monuments[; or] insults (ბღალავს) State symbols (flag, coat of arms, anthem), the national currency of Georgia or of any other State, religious symbols, natural and legal persons, their activities, profession or products …”

In 2016, the Georgian authorities proposed draft legislation that would ban religious insult, however, the bill was withdrawn later the same year.