The Polish authorities have charged 3 LGBTI+ rights activists with “offending religious beliefs” in connection with the use of posters of the Virgin Mary. 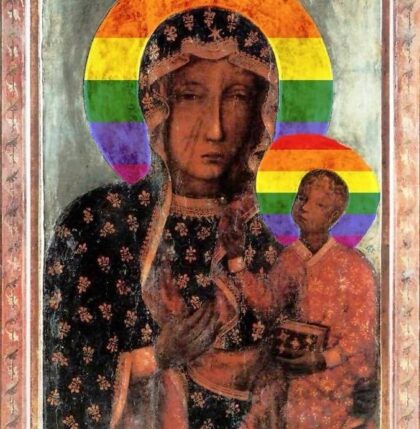 According to a coalition of prominent human rights organizations, the three female human rights defenders were formally charged under Article 196 of the Criminal Code in July 2020. The Prosecutor general alleges that the women pasted posters depicting the Virgin Mary with a rainbow halo symbolic of the LGBTI+ flag around her head and shoulders in public places in April 2019 and in doing so had “publicly insulted an object of religious worship in the form of this image with offended the religious feelings of others.” Their trial was expected to commence on 4 November 2020 before a court in Plock. A campaign to drop the charges launched by Amnesty International has received more than 140,000 signatures.

The prosecution of the activists comes amid the rise of anti-gender movements and some municipalities declaring “LGBT free zones”. Media reports indicate that the posters were placed around the city of Plock in response to the exclusion of the LGBTI+ community from society and an Easter display, which featured slogans about crimes and sins, including “gender” and “LGBT” among them.

In response to the arrest of one of the activists, Elżbieta Podleśna, in May 2019, Poland’s then Interior and Administration Minister, Joachim Brudziński, stated on Twitter: “No fantasy about freedom and “tolerance” gives ANYONE the right to offend the feelings of believers.”

Responding to the news, the EBL Coalition stated:

“Article 196 of the Polish Criminal Code represents a clear breach of international and regional human rights standards and should be repealed without delay. No religion is sacrosanct. Precluding the possibility of insulting someone’s religious beliefs, prohibits critical discussion of religion and leads to the further marginalization of minority groups. They authorities must refrain from using it as a tool to curtail the freedom of expression of artists and activists. The charges against the activists should be dropped immediately and unconditionally.”

Under Article 196 of the Criminal Code, a person found guilty of “offending religious feelings through public defamation of an object or place of worship” may be imprisoned for up to two years. Due to the focus on religious objects or places of worship, the use of religious symbols in different forms of art has led to many Article 196 cases. Although Article 196 does not protect any particular religion, in practice it is only used to investigate alleged insults against Christian religious symbols.

The EBL Coalition joins the calls of Amnesty International, Freemuse, Front Line Defenders, Human Rights Watch, ILGA Europe, and KPH Campaign Against Homophobia for the charges against the activists to be dropped and for the Polish authorities to repeal Article 196 of the Criminal Code.