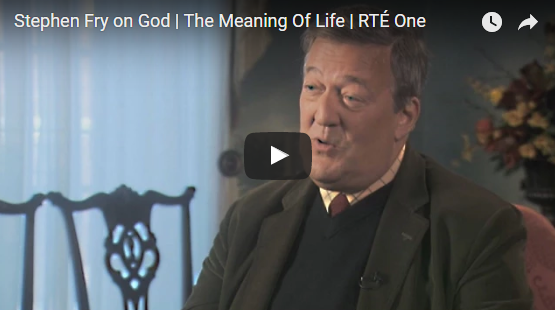 Published on 8 May 2017 in Blasphemy news

A police investigation has been announced into an interview segment on RTÉ, the public service broadcaster of the Republic of Ireland, which featured the British comedian and actor Stephen Fry.

Ireland passed a new “blasphemy” law in 2009, making it the only developed country to have introduced “blasphemy” as a criminal offence in the twenty-first century.

During the 2015 interview on The Meaning of Life, hosted by Gay Byrne, Fry was asked what he would say to God. He replied: “How dare you create a world in which there is such misery that is not our fault? It’s not right. … It’s utterly, utterly evil. Why should I respect a capricious, mean-minded, stupid God who creates a world which is so full of injustice and pain? … Because the God who created this universe, if it was created by God, is quite clearly a maniac, utter maniac. Totally selfish. … The moment you banish him, life becomes simpler, purer, cleaner, more worth living in my opinion.”

The 2017 investigation by the Gardaí (Irish police) was prompted by a complaint from a member of the public following the broadcast of The Meaning of Life in February 2015 according to the Irish Independent. Gardaí in Donnybrook only began a full investigation two years later, after having come back to the original complainant. The anonymous complainant told the Irish Independent that he wasn’t personally offended by the interview, but thought he was doing his “civic duty” by reporting an act of “criminal blasphemy”.

“It highlights a law that is silly, silencing, and dangerous.

“It is a silly law because it suggests that the creator of the universe needs the Oireachtas to protect its feelings.

“It is a silencing law because many Irish media outlets are self-censoring themselves to avoid the possibility of being prosecuted.

“And it is a dangerous law because the Islamic States at the United Nations use western blasphemy laws to justify their own blasphemy laws, for which they execute people.

“Indeed Pakistan, on behalf of the Islamic States, has asked the UN to use wording from the Irish blasphemy law to ban blasphemy internationally.”

The organization noted that others who republished the interview and other similar “blasphemous” content could also conceivably be prosecuted. They therefore republished 25 blasphemous quotes in “solidarity” with Mr Fry, adding, “If we are prosecuted, we will challenge the constitutionality of the blasphemy law. If we are not prosecuted, it will again highlight the absurdity of this law, which should be repealed immediately. We again call on the Irish Government to honour its commitment to hold a referendum to remove the ban on blasphemy from our Constitution.”

President of the International Humanist and Ethical Union (a transnational partner in the End Blasphemy Laws campaign) wrote in the UK’s Independent online:

“Debate and discussion over powerful and emotive topics like religion and belief are, by their nature, endlessly provocative. They are also vital, and when so many countries still try to use the force of law to shut down these discussions, we all risk intellectual impoverishment. …

“Islamic states often justify their blasphemy laws by pointing to the existence of those in Europe, calling Europeans hypocrites for advocating for abolition whilst still having their own. Indeed, since 2013, EU foreign policy has been that blasphemy laws should be abolished, in spite of the fact that several member states have their own.

“The main international effort to repeal blasphemy laws has been through the End Blasphemy Laws campaign, spearheaded by the International Humanist and Ethical Union and European Humanist Federation, of which the British Humanist Association is a member. Over its two years the campaign has seen successful repeals in Norway, Iceland, Malta and France. The current Irish Government is committed to holding a referendum on doing the same. Now it is surely time to fulfil that promise.”

A spokesman for Mr Fry said there was “nothing for us to say while this is under investigation.”

The investigation could conceivably result in a prosecution. It would be the first such prosecution under the 2009 law.