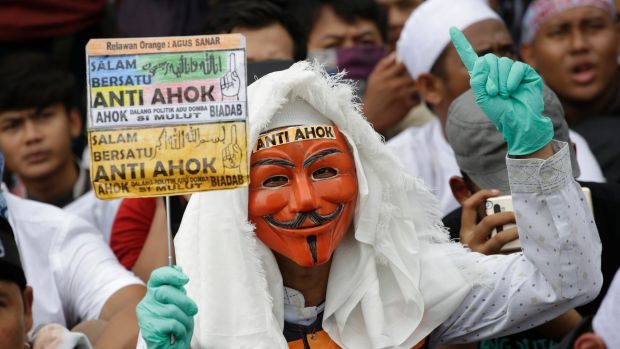 Published on 9 May 2017 in Blasphemy news

Outgoing governor of Jakarta sentenced to two years for “blasphemy”

The outgoing governor of Jakarta, Basuki Tjahaja Purnama, usually known as ‘Ahok’, has been sentenced to two years in jail for criminal “blasphemy”.

The governor of the capital city of Indonesia, world’s most populous Muslim country, had previously been highly popular. But he was due to stand down later in 2017 after having lost the governorship election last month, following a vicious campaign against him for alleged “blasphemy”.

Various Islamist groups had called for Ahok’s imprisonment , or even his execution, following a blasphemy accusation last year. Ahok, who is from a Chinese Christian background,  had mentioned during a campaign speech that political opponents were citing the Qur’an against him, a claim which, in an edited YouTube video which went viral, was made to look as though he was criticizing the Qur’an itself.

The International Humanist and Ethical Union (a partner in the End Blasphemy Laws campaign) comments:

“This sentence is the wail of a warning siren for a country in which intolerant Islamism is rising.

“We have seen the same pattern in states as far apart as Bangladesh and Mauritania, Pakistan and the Maldives in recent years. The pattern is that hardline Islamist groups, and violent extremists, are making more and more intolerant demands, against the rights and liberties of others. They are creating and using high profile “blasphemy” incidents to whip up religious hysteria and further an intolerant agenda. And instead of being slapped down by the authorities under constitutional principles, they are instead being flattered and facilitated and given what they want.

“We call on the courts to overturn the sentence on appeal, acquit Ahok and ensure his safety upon release. We call on the government to reconsider and abolish the country’s ‘blasphemy’ law. More than that, we call on all states suffering intolerant and militant Islamism not to make concessions, not to give in to intolerant Islamism, because every concession only creates more demands. Whereas upholding human rights and liberty is right, and will always be better for the nation in the long run.”

“As a Chinese Christian, Ahok is Indonesia’s most prominent ethnic minority politician and was the first non-Muslim governor of Jakarta for over 50 years. His campaign for re-election was overshadowed by the blasphemy allegation against him and he lost the vote last month.

“On 27 September 2016, Ahok reportedly quoted a Qur’anic verse on the campaign trail while addressing concerns that his political opponents may use the verse to discourage people from voting for him as a non-Muslim. He was then falsely accused of criticising the verse itself. The court case against the governor was filed by several conservative Islamic groups after his statement went viral via a doctored YouTube video.

“On 13 November 2016, Ahok was formally charged with blasphemy and his trial began on 13 December 2016. An estimated 500,000 Muslims turned up to a number of rallies in November and December 2016 to protest against his supposed blasphemy.”

“On Tuesday, hundreds of members of hardline Islamist groups gathered outside the south Jakarta courtroom amid a heavy security presence, calling for Ahok to be given the maximum penalty.

“As news of the sentence emerged members of the crowd shouted “God is greatest”.

“The government has been criticised for not doing enough to protect religious minorities, but President Joko Widodo, an ally of Ahok’s, has urged restraint over the trial and called for all sides to respect the legal process.

“Thousands of police have been deployed in the capital to prevent clashes between Ahok supporters and opponents. “Both groups will have the opportunity to demonstrate, but we are taking steps to prevent clashes,” said the national police spokesman, Setyo Wasisto.”

Sentencing Ahok, the presiding head judge said: “As part of a religious society, the defendant should be careful to not use words with negative connotations regarding the symbols of religions, including the religion of the defendant himself.” Another judge explained that: “the defendant didn’t feel guilt, the defendant’s act has caused anxiety and hurt Muslims.” While Indonesia has a tradition of religious tolerance and pluralism under the state philosophy of Pancasila, it seems that this is now increasingly being interpreted less as ‘unity in diversity’ and more as ‘unity enforced by conformity’.

This is another example where political interests and the interests of conservative Islamist groups combine with a bad law and so render a grave injustice. We can hope that the appeals court might overturn the conviction. And more widely, we can hope that the Indonesian government will come to its senses, see the terrible future that the “blasphemy” mobs would bring about, and work to quickly review and abolish the “blasphemy” law.